What Is a Revenue Stamp?

Ah yes! The ubiquitous collecting of taxes! The providing of certain government services required businesses, or sometimes individuals, to pay a tax for the service or good received. The same thing is still done today, but perhaps we don’t notice it as much, because the taxed amount is usually discreetly included in the final amount we end up paying. In the past, however, once the tax was paid, a revenue stamp displaying the exact monetary value was affixed to the document in question and served as proof that the amount had been paid and collected.

Catalogues That Contain a Listing of Revenue Stamps 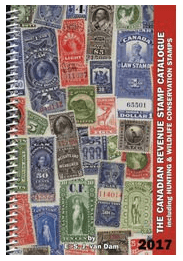 Unfortunately, the Unitrade Catalogue of Canadian stamps does not list revenue stamps. If you want to have a comprehensive listing of all Canada revenue stamps, you will have to obtain the Canada Revenue Stamp Catalogue by E.S.J. Van Dam (pictured above). This phenomenon is quite common actually; many postage stamp catalogues don’t list revenue stamps, once exception being the Scott Catalogue. Some feel that this is why they became unpopular with collectors for a long time. However, in recent years the collecting of revenue stamps has undergone a kind of revival and acquired an almost cult-like status. Many exhibitionists have now given revenue stamps their “stamp” of approval.
Despite the fact that certain philatelists once scorned revenue stamps, nothing can change the fact that they are often quite rare issues which can fetch impressive amounts at auction. For example, at a recent Siegel auction, several USA revenue stamps sold for well over $1000 USD each!

Here is a partial list of various revenue stamps and what they were used for:

These stamps were affixed to legal documents and mostly used to pay the taxes on the documents used in court proceedings. If a document was not stamped, it could not be used in court.

Businesses (such as factories and general stores), which used weights and measures in their trade, had to have them periodically checked by government inspectors to maintain their accuracy. Once the inspection was completed, a document was issued indicating this, as well as the tax paid on the service.

The Marijuana Tax Act, introduced in 1937, made the possession or selling of marijuana illegal in the USA, except for medical purposes, or for use in the hemp industry—and these had to pay a tax in order to import, manufacture or distribute it.

During the American Civil War, there was a rise in the number of families having photographs taken of their families, especially of the members going off to war, as a keepsake. In an effort to raise funds to defer the cost of the war, the government introduced a new luxury tax on photographs, to be paid by photographers for the sale of their photos. Existing USA revenue stamps could be used (such as the playing cards stamp pictured above) instead of printing a new issue. All that mattered was that the amount was correct.

When you had your gas supply inspected, which was obligatory, a fee had to be paid for the service. The stamps indicated the amount paid.

These stamps, though still not postage stamps, had to be purchased at a post office. A postal note (later called a scrip) was basically a money order made out for the sending of a small amount of money. The numerical value of the stamps affixed to the note (or scrip) represented the amount of money being sent.

Simply put, a tax added to the purchase of whatever is considered to be a luxury item by the government (such as wine). This practice still occurs today. In British Columbia, for example, buyers of luxury cars worth more than $150,000 have to pay 20% in PST, whereas buyers of cars worth less than $55,000 are only charged 7% PST!

For a more comprehensive listing and detailed description of Canada revenue stamps, as well as images of old documents bearing them, view the following article from the British North American Philatelic Society: http://www.bnaps.org/ore/Ryan-RevenueIntro/Ryan-Revenue-Intro.htm