What are Plate Blocks? Good question! People collect postage stamps in many forms. You can collect singles, pairs, blocks, sheets, and coils. They all have their special characteristics. If the perforations between at least four stamps are unseparated, in a 2 × 2 configuration, then you have a stamp block. Philatelists collect blocks in groups of 4, 6, or even up to 20. However, blocks of four stamps are the most common.

WHAT ARE STAMP BLOCKS? 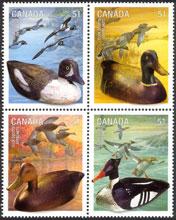 A stamp block can be four of the same stamp or be four stamps from a series in se-tenant form. The stamps are unseparated. These se-tenant blocks of different stamp series issued by Canada Post are especially fun and popular to collect. The Unitrade Specialized Catalogue of Canadian Stamps usually assigns se-tenant blocks their own catalogue number.

WHAT ARE PLATE BLOCKS? 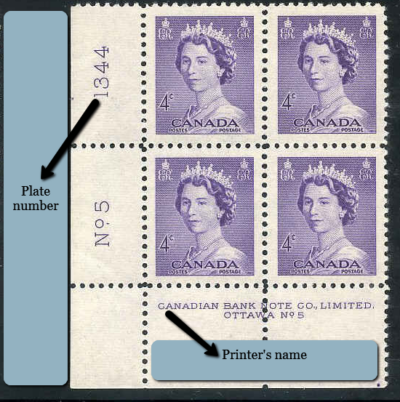 A plate block is a special kind of stamp block. These blocks still have the selvage attached on two sides of the block. What is selvage? It is the margin paper that goes all around a stamp sheet. The printer prints the serial number of the engraving plate or cylinder on the selvage, as well as the printer’s name. So when collectors detach a block of stamps from a stamp sheet and keep the selvage on two sides of the block that block becomes a plate block.

Strictly speaking, “plate block” only applies to blocks of stamps that were printed from an engraved plate. The printers engraved serial numbers on each of these plates for identification purposes and for quality control. Corner blocks are the most common.

When a printer noticed a sheet of stamps was badly printed, he/she could cross-reference the plate number on the stamp sheet with the corresponding engraved plate. The printer could then check to see if the plate had been damaged in some way and needed to be replaced. 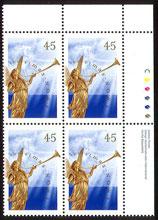 In the late 1960s, printing by lithography was taking over. This method no longer used engraved plates. There was no longer any need to print plate numbers on the selvage. Instead, the printer inscribed the printer’s name and the designer’s name on the selvage. Technically, we call these “inscription blocks”. However, most collectors still use the term plate block. The Unitrade catalogue lists both kinds of blocks under their individual stamp descriptions or under their own column heading which reads “PB”.

Collectors often like to collect all four corners of a stamp sheet in PB form. Philatelists use UR (upper right) LR (lower right) UL (upper left), and LL (lower left) to identify each plate block’s original position. That way, collectors know which corner of the stamp sheet a particular PB came from.

According to the introductory pages of the Unitrade Catalogue, the collecting of Plate Blocks created some controversy in Canada Post’s history. Basically, in 1957, in order to reduce the number of “broken panes” leftover in post offices (resulting from collectors only wanting to buy the serialized corner of a pane), Canada Post decided to only sell panes with the inscription trimmed off the selvage. No more plate blocks!

Collectors howled in protest! In order to appease them, Canada Post agreed to sell them through its “Philatelic Service”. However, they would still only sell the trimmed panes in their post offices. It didn’t last though. In the 1990s, Canada Post ditched the idea and resumed shipping inscribed panes to post offices. 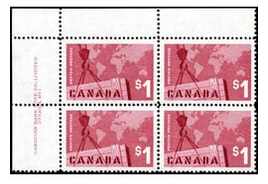 Plate blocks are fun from a technical and historical point of view. Collecting them can also be quite lucrative. Check out the special deal on plate blocks for “Canada Stamp #411—Crane and Map (1963)”, available until September 30, 2022, at Arpin Philately. Have a look at what we have to offer on a regular basis!

2 thoughts on “What are Plate Blocks?”