The Postal service in Canada began under the French regime in 1705 with delivery of mail by courier between Quebec City, Three-Rivers and Montreal. In 1763 it was taken over under the British Crown by Benjamin Franklin and formed part of the North American Postal System. 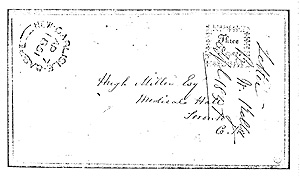 In February 1851, Canada’s first Postmaster General, James Morris, delegated control for postal operations to each province. During this transition period, Canadian postage stamps were not available. Postmasters were instructed to affix their own marks to mail pending the arrival of the first issues of Canadian stamps estimated to arrive a few weeks later (the red three-pence Beaver, issued April 23, 1851).

Canada was not as familiar with Postmaster’s Provisionals as our southern neighbours in some New England states. Perhaps due to his Loyalist connections, the New Carlisle Postmaster decided to make his own stamp. Did he know this was illegal according to an 1850 Postal Law? Probably not. In any case, no one took notice.

New Carlisle Postmaster Robert W. Kelly acquired a supply of envelopes and proceeded to draw a rectangular stamp in the upper right-hand corner of each envelope. He then decorated the outer edge of each one with fancy curlicues. As the postage was paid, he would write “Letter”, indicate the proper rate of postage of “three pence”, write the date of mailing (in this case, April 1851), and sign his name “R.W. Kelly” to authenticate the mailing.

On the back of the above letter, the Post office stamp “Quebec” is dated April 16, 1851, indicating the letter passed through Quebec City one week from the date of mailing in New Carlisle. Amazing!

This one-of-a-kind Postmaster’s Provisional is the only known survivor and is considered one of the rarest and most valuable by collectors. It places New Carlisle and the Gaspé right up there on the Philatelic Map!