Good question! We all want to know what stamp perfins are, right? The word “perfin” is a shortened version of the two words “PERforated INitials” or “PERforated INsignia”. Philatelists also call stamp perfins “SPIFS”. This is an acronym for “Stamps Perforated with Initials of Firms and Societies”. I have to say, perfin is a lot simpler to remember!

We understand the meaning of the word when we know its origin. The meaning almost becomes self-explanatory. People or companies punch tiny holes into a stamp in the shape of letters, an object, or a design. This is a perfin.

Why are perfins used?

Why did people perforate stamps this way? First and foremost, it was a security measure. Companies adopted the technique because they wanted to prevent the theft of unused stamps by employees. Companies punched their stamps with a perfin, and then they could only be used by the company or person who owned that perfin. A company could only use a perfin on their own business mail. So, if an employee stole these stamps with perfins, and then tried to use them on their own private mail, someone from the post office would spot them.

Governments first used perfins in Great Britain. However, other countries soon caught on to the idea. Canada started using perfins too.

What are the different types?

There are two types of perfins: private and official. Firstly, businesses and companies use private perfins. Secondly, federal and provincial governments and their various departments use official perfins. For example, Sun Life Assurance of Montreal had a private perfin.

The Unitrade Catalogue lists perfins that the federal government used on pages 622–623. As the description at the top of page 622 states, official Canada stamps were perforated with the initials OHMS (On His Majesty’s Service). Issued from 1923 to 1963, authorized government agencies used these stamps for mail sent to and from their respective offices. In 1949, these agencies stopped perforating the stamps. Instead, they overprinted them with the initials O.H.M.S. They only used this overprint for one year. The agencies replaced it with the single letter G in 1950. Philatelists refer to these stamps as BOB stamps.

Where can I learn more about perfins?

“Canadian Perfin Officials” has a detailed compilation and explanation of official perfins. Tony Brown wrote this great article. The article contains many images of perfins, including those used by provincial and federal departments.

Collectors can also check out the handbook “Canadian Stamps with Perforated Initials”.   You can locate this e-book on the British North America Philatelic Society (BNAPS) website. The book has a lot of information and great images. It also details private perfins in Canada. 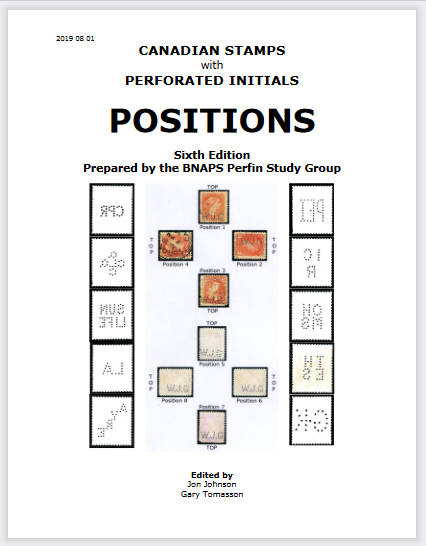 Are perfins worth anything?

Usually, if a stamp is defaced, then its value is reduced. Collectors are no longer interested then. However, many collectors love collecting perfins because some of them are worth quite a bit!

So why not look into perfins?! They can be quite fascinating.