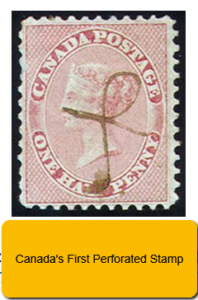 Stamps are made up of different parts: the type of paper, the vignette, the denomination, etc. One of the most important things a collector needs to understand properly is stamp perforations, or “perfs” as they are commonly referred to. There are many different methods of postage stamp separation. This article will explain perforations to you.

What are stamp perforations?

Simply put, perfs are little round holes cut along the edges of a stamp. Stamp makers punch holes into the stamp sheet to help us separate our stamps from each other more easily without tearing them. Although, if you are anything like me, you’ve probably succeeded in ripping or tearing quite a few anyway!

I confess to you right now that one of the jobs I dislike the most is having to separate a new (or old) sheet of stamps into individual specimens. I ALWAYS end up tearing more than my share (which is not good when you work for a stamp dealer!).

Then I learned the secret to separating stamps successfully: fold your sheet of stamps along its perforated edges first, both along one side and then the other. That will weaken the paper’s fibres enough to make the separation process a lot easier—and no tearing!

That’s an easy question to answer. No, at the beginning of stamp production, stamps were not perforated. So when you wanted individual stamps, you had to cut them out one by one by hand with a pair of scissors, a knife, or a razor blade. In philately, these straight-edged stamps are called “imperforates.” 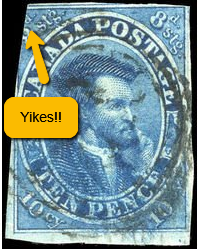 It was really hard for postal workers and other individuals to cut perfect edges, if not nearly impossible. Some stamp edges were uneven or crooked. Some edges were wide and others narrow. Worst of all, some stamp edges were cut way too close to the stamp image and ended up slicing part of it away! Just look at some older stamps to see this for yourself.

Henry Archer of Ireland is acknowledged to be the creator of both the idea and the first perforation machines successfully used in 1848. Eventually, he sold his patents to the Postmaster General of Great Britain, and others developed machines based on his designs. Many other countries started perfing their stamps soon after the invention of the first machines. Canada issued its first perforated stamps in 1858.

What are the different kinds of perfs?

There are three kinds:

LINE-this is the earliest perforation method. A single row of pins was placed in a line on a machine and then punched down through the stamp sheet. Then, the stamp maker moved the sheep up the width of the stamp and the machine punched another row of holes. This was repeated until all the rows were punched out from top to bottom, making horizontal rows.

Then, the stamp maker turned the sheet around 90° and the punching of rows was repeated, until the entire sheet was punched from top to bottom again, thereby covering the sheet both horizontally and vertically.
This method is rarely used in modern stamp production.

COMB-the pins of the machine are arranged like a comb. So, three sides of the stamps are punched at the same time, row by row. The perforating begins again from top to bottom until the entire sheet has been covered.
Because the comb method perforates on three sides of the stamp, there is no need to turn the paper 90° this time in order to restart the process in the other direction.

Interesting fact: the long, horizontal top of the comb is called the “line” and the short, vertical rows that come down from the top are called the “legs”.

Can mistakes be made when perforating stamps?

Yes! This is especially true with line perforations. It’s obviously impossible to line up and center the row of pins perfectly when the stamp sheet is turned around to perf the other direction. You can usually spot a line perforation because the perfs in the corners of the stamp don’t line up properly. Also, line perfs produce very uneven margins, especially on older stamps. Despite this, they can still be worth quite a lot!

In the case of comb perfs, sometimes some stamps on the sheet can end up a bit shorter than others if the person moving the paper up didn’t do it evenly.

As for Harrow perfs, they are pretty much foolproof. Correct me if I’m wrong!

Other mistakes errors can creep in also. For example, sometimes the pins don’t punch through the paper completely, or occasionally not at all on some parts of the stamp sheet. But this is pretty rare. However, when it does happen, these “misperfs” can be worth a lot to collectors.

How do I measure perfs?

Perforation measurements are taken by counting the number of holes within a 2 cm width. The easiest way to measure these is by using a perforation gauge. You just line your stamp up with the gauge until the spaces match. Please see this article (How to use a perforation gauge?) for a more detailed description. Shop online for your perforation gauge in the Arpin Philately Boutique.

Can perfs affect the value of my stamp? 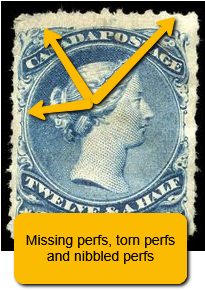 Once again, YES! As already mentioned, perf errors can sometimes increase the value of a stamp, because the stamp is rarer. Stamps that look the same but are actually different because of their perf measurements can sometimes have a huge difference in value; one perf measurement being more valuable than the other.

Also, the condition of your perfs determines the value of your stamp. Ideally, you want a stamp with sharp, well-delineated perfs. They shouldn’t be too short or look “nibbled” as philatelist say! Torn or missing perfs are obviously a no-no. However, in the case of older, rare stamps, even those with damaged perfs can still be worth quite a lot. Just not as much as a perfect specimen. Ironic, isn’t it? Perfect perfs can make your stamp more valuable, but in some cases, perf errors can do the same!

Are you ready to start identifying your perfs? Have fun!