Do you want to know the history of the first postage stamp in the world? Humans have used many methods of communication throughout the centuries. We’ve gone from inscribing rock walls and clay tablets to using ink on papyrus. Ink on paper followed and then typing, laser printing, etc. More often than not, messages are now sent by text or email.

In the past, it was often difficult to send messages because there was no reliable system in place. Letters often took forever to reach their destination. Or, they arrived too late-if they arrived at all! Imagine only finding out that a loved one had died many months or years after the fact!

So, in time, various forms of postal service were set up in different countries for delivering mail and parcels. Couriers were used for transporting the post. Unfortunately, letters were expensive to send and, often, only the rich could afford to.

In Great Britain, two things set the price of sending mail. Firstly, the amount of paper used to write the message. The more sheets of paper, the higher the price. Secondly, the cost was also affected by the distance the mail had to travel. The person receiving the letter paid for it, not the one sending it! So, before the invention of postage stamps, if you didn’t have enough money to pay for the message delivered to your door, you had to refuse it.

High prices led to some pretty ingenious ways of beating the system. One method was for two people to develop a secret, written code between them. The sender would then use this code to write the message on the envelope. The receiver could then decipher the message and refuse the letter. But they would know what its contents were anyway! Sneaky!

In order to make the sending of letters accessible to all, the first postage stamp would soon be on its way.

A NEW SYSTEM IS NEEDED

No one could deny that a new system was necessary. There has been much discussion over who can lay claim to having invented the postage stamp. But there is no denying that Mr. Rowland Hill of Great Britain is responsible for the postage stamp as we know it today. He developed an idea for postal reform in his native country and was eventually asked to carry it out. Through his efforts, the first, official, adhesive, postage stamp of the world, the Penny Black, was issued by Great Britain on May 1, 1840.

Now, for the low price of 1 penny, people in Britain could send a letter anywhere within Britain. Unlike before, the cost of a stamp was based on weight (less than 14g only cost 1 penny) and not on distance. Also, the SENDER paid the cost of the postage stamp and not the receiver.

Mr. Hill had a hard time convincing everyone that his reforms would work. Many were afraid that such a low cost for a stamp would bankrupt the system. However, Mr. Hill knew that if the poor could send letters too, the volume of mail would increase exponentially and make his reform profitable in the long run. Sure enough, that’s what happened. Within 20 years of issuing the Penny Black, the amount of mail handled in Britain quadrupled! Several years after that, the postal service was turning a profit again. 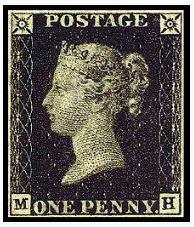 The Penny Black was a beautiful little stamp featuring a young Queen Victoria in profile against a black background. The postage stamp was adhesive and imperforate. It had straight edges because you had to cut it out by hand.

After it was applied to an envelope, it was canceled by postal employees to prevent its reuse. The cancellation was a Maltese Cross. However, the ink used for the cancellation was red and didn’t show up well against the black stamp. The other problem was the red ink was easy to wash off. So people would often wash their canceled postage stamps and reuse them. Originally issued in May 1840, the printing of the Penny Black lasted for less than a year.

In February 1841, postal authorities decided to replace the Penny Black with the Penny Red in order to prevent postal fraud. The stamp looked pretty much the same, except that it was now printed in red ink, and the cancellation mark was in black ink. The cancellation showed up a lot better.

THE FIRST POSTAGE STAMPS OF OTHER COUNTRIES

It was only a matter of time before the concept of postage stamps caught on with other countries. Here are some examples: 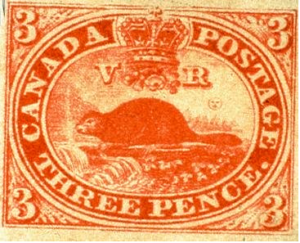 A NEW HOBBY IS BORN-PHILATELY AND STAMP COLLECTING

Stamps proved to be popular with the public right away. According to urban legend, a British woman put a notice in the newspaper asking people to help her acquire as many copies of the Penny Black as possible because she wanted to wallpaper her wall with them!

Soon, philately was born–the study of stamps as well as postal issues and material. Collectors began collecting and a new hobby was born.

So there you have it! The history of the first postage stamp of the world in a nutshell. So the next time you stick a stamp on an envelope, remember: postage stamps have come a long way baby!